The Sweep of the Lord's Letters to the Seven Churches 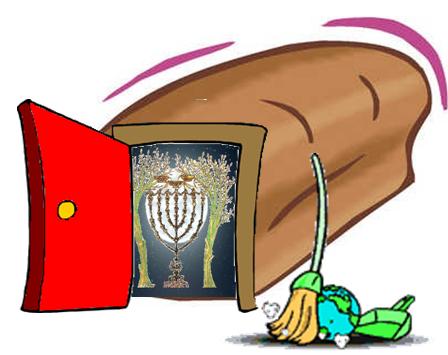 Question: In Revelation 2 and 3, the Lord writes seven letters to seven churches. The last letter is to the Church at Laodicea who many believe is a church with no believers. How could that church, which presumably started out as a church of believers, over time become a church of unbelievers?

The answer is in the seven letters themselves...If we look at the five churches that the Lord rebukes (all except Smyrna and Philadelphia), we see a downward progression away from Godliness  and the reason why. When we read the last letter we see Laodicea, a church bereft of believers.

1. The Ephesians were doing a commendable job of sweeping God's house clean of leaven, of both false doctrine and sin, but they were missing the mark of walking in love, which is the central part of Christ's commandment and the summation of God's law. They were obedient to eliminate the negative but not to accentuate the positive.

'I know your deeds and your toil and perseverance, and that you cannot tolerate evil men, and you put to the test those who call themselves apostles, and they are not, and you found them to be false;...'Yet this you do have, that you hate the deeds of the Nicolaitans, which I also hate. [The Ephesians were excellent sweepers of leaven---a broom in every hand]

'But I have {this} against you, that you have left your first love. 'Therefore remember from where you have fallen, and repent and do the deeds you did at first;[At one time they reflected Christ's love, but no longer because they were too busy sweeping leaven]

2. Pergamus tolerated false teaching which, as the Lord indicates, would lead to sin.

'But I have a few things against you, because you have there some who hold the teaching of Balaam, who kept teaching Balak to put a stumbling block before the sons of Israel, to eat things sacrificed to idols and to commit {acts of} immorality..'So you also have some who in the same way hold the teaching of the Nicolaitans. [Satan's time worn playbook is to introduce sin into a church by first intruducing false doctrine---"Hath God really said?"]

But I have {this} against you, that you tolerate the woman Jezebel, who calls herself a prophetess, and she teaches and leads My bond-servants astray so that they commit {acts of} immorality and eat things sacrificed to idols. [the inevitable progression is first the leaven of false teaching which leads to the leaven of sin]

4. At both Pergamus and Thyatira, there were corrective and restorative measures that the Lord warns he would take (probably by sending a faithful servant---like Paul who warned the Corinthians that he was about to come after them with words that would tear down rather than build up). But at Sardis, we see a church where unbelievers had infested to the extent that the Lord's command is that they would come to life (i.e. be saved). However, he acknowledges that there were some at Sardis who were true believers---His blood cleansing them from sin

But you have a few people in Sardis who have not soiled their garments; and they will walk with Me in white, for they are worthy.

and whose names have been written in the Book of Life.

'He who overcomes will thus be clothed in white garments; and I will not erase his name from the book of life, and I will confess his name before My Father and before His angels.[these are both words of encouragement to the believers and a gospel call to the unbelievers]

But the Lord does not command those few believers to do anything. Why? Maybe because they were babes in Christ amid a sea of false doctrine and sin.

5. Finally we get to Laodicea to whom the Lord gives no commendation and nor acknowledgment of any believers. His message to that church consists only of the gospel.

These letters are directed to actual local assemblies that existed almost 2,000 years ago, but they are also very practical for us today because Satan seeks to gain a foothold of destruction in God's plans by infiltrating leaven and tares into God's house.